12th April - The Boks and Jocks go in

On the morning of 12th April, Douglas Haig visited Allenby's Headquarters at St Pol, unfortunately they did not meet see Allenby as Douglas Haig clearly wanted to impress upon Allenby, instead he had to tell the following to Major General Bols, Allenby's Chief of Staff.

"The enemy has now been given time to put the Drocourt- Queant line (which Rouex formed part of) into a state of defence and also  to organise positions in our immediate front. He has also brought up a large amount  of guns. Our advance must therefore be more methodical than was permissible on Monday night and Tuesday after the victory.Now we must try and substitute shells as far possible for infantry." 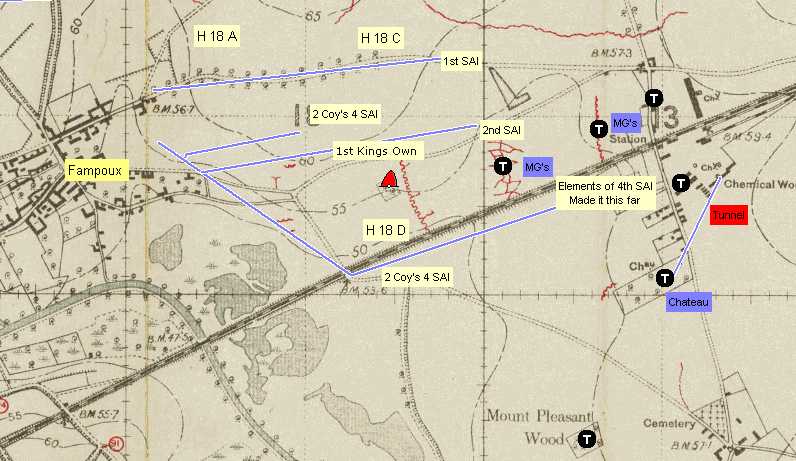 A 1917 Trench map of the battlefield.

It would appear that Allenby chose to ignore these words from Douglas Haig , as result many thousands of men would face death, wounds and destruction.

On the morning of the 12th April, the men of the 9th Scottish Division which included the South African Infantry woke from a very uncomfortable and cold sleep, many could not stand up on their own and had to be shaken into life. They were barely capable of functioning, let alone fight!

Most were enduring their 4th night of sub zero temperatures and were suffering accordingly, it was so cold that the kilts of 4th South African Infantry (Scottish) were literally frozen stiff. They were looking forward to hearing of a relief or at least some hot grub. 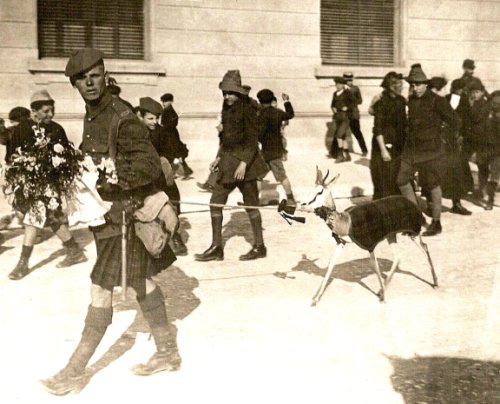 What they heard send a chill of fear through their body, at 12 noon they were to assemble in Fampoux and attack Rouex in broad daylight. Exactly the same as the men of the 4th Division before them.

Not only that if they failed, they would be going in again on the 13th. It was a death sentence.

The fate which befell the men of the 4th Division would be well known to one all, after all they lay stiff and cold on the open fields before them. Major General Lukin, A South African, and now Divisional Commander decided to attack straight through 4th Division as there was no time to plan anything else.

At 1145 am , only 15 minutes before the attack was due, Brigadier - General Lawson complained bitterly to Lukin, the tone of that conversation can only be imagined, but Lawson convinced Lukin that his men were in no fit state to attack.

A postponement was declared whilst Lukin referred  the matter to his Corps Commander. The answer which came back was not what he was hoping, artillery support could not be given on a such a heavy concentration on another day. Orders had to be obeyed, the attack would be made, but a 5 hour bombardment would be made and zero hour was put back to 5pm. Their fate had been sealed.

The irony of the statement about 'heavy artillery support' would not be lost on many men, the artillery barrage was for the most part utterly ineffectual with barely a shell landing in the Chemical Works.This was not the fault of the previously excellent Divisional artillery, they were simply unable to move close enough to be of help.

Frank Maxwell VC DSO who commanded a  Brigade consisting of the 11th and 12th Royal Scots, 9th Cameronians (6th KOSB in reserve)  considered the sunken road a 'death trap' having recced the area. He boldly decided to lead his men over open ground down the hill from the Point de Jour ridge, well over a mile of open ground. Unbelievably they made the one mile advance under with very  few casualties, thier luck would not hold.

At 4pm the South Africans formed up in Fampoux and were mercilessly shelled, veterans of Deville Wood commented that it was worse than anything they had experienced there, they immediately took heavy casualties. To the north the Scots advanced over the open ground taking remarkably few  casualties. 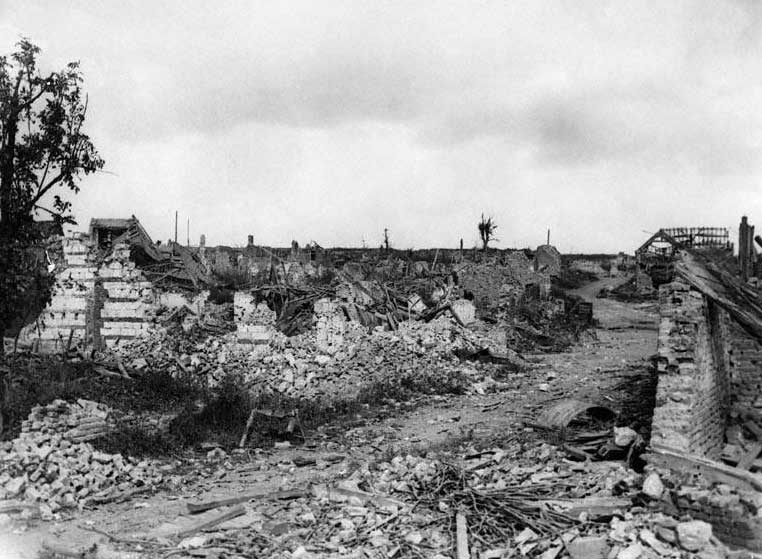 Fampoux after the battle, it was virtually intact before.

At 5pm the attack proper began, the artillery barrage started in the wrong place, some going way over the first German trenches and 'drop shorts' which killed some 4th Division men holding the line. It then took off far too fast leaving the tired, cold and hungry infantry to face it on their own.

Despite the utmost gallantry the attack was all over bar the dying in about 30 minutes, the casualty rate was phenomenal, men were going down every few seconds.

In the midst of the carnage men displayed great gallantry:

"“This NCO displayed great resource and initiative in dealing with an attempt by the enemy E of Fampoux to isolate his Platoon by quickly reorganising all the rifles in his vicinity, successfully smashed the movement. He bore himself throughout the operation of the 12th April 1917 with great coolness and set a fine example to his men.” the certificate is signed by the Commanding Officer of the 1st South African Infantry."

The Rifle Brigade sent to cover the Royal Scots flanks could barely get out of their own trenches, such was the state of the trenches and the withering fire, they suffered 50 casualties in 2 minutes before retreating back to the Hyderabad Redoubt.

Unbelievably a handful of the 4th South African Infantry were last seen by an observation balloon fighting their way into the area of the Railway Station, outnumbered and isolated they fought and died together. Their bodies were recovered a month later when the station was finally captured. For most however the advance was over before practically before it had began.