Although Peter lived in Gorebridge, a village that Nitten has long had a friendly rivalry with, Peter's family hailed mostly from Newtongrange and he was born and bred there. He was well liked  and was awarded the Military Medal for Gallantry in 1917 . He was killed in action on the first day of the Ludendorf Offensive of 1918, his death is mentioned in the diary of Private James Marchbank which features elsewhere on the site.

Here is Peter's obituary in 1918 the mistake in Rank is the Dalkeith Advertiser.

" Private (sic) Peter Cornwall, Royal Scots was a son of Mr & Mrs James Dickson Cornwall, Powdermill Cottages. An employee at Arnsiton Colliery, previous to the outbreak of hostilities he served with the Dalkeith Territorial Company. The call to arms found him ready and he rejoined his old company proceeding to France in November. He had passed unscathed through all the fighting till the recent battle. He won the Military Medal for bravery last year. He was the first in his Battalion and the first Gorebridge District (I still think of him as a Nitten boy) lad to receive the bombers badge for proficiency expertness."

I found the date of his MM in the 1917 archive of the Dalkeith Advertiser , James Marchbank's diary  confirmed that the action took place at Tower Hamlets Ridge on the Menin Road.It appears they were engaged in building a light railway under heavy shell fire, whilst the main force was clearing a series of German bunkers. Here is an account from a man in the King's Royal Rifle Corps who were engaged in the same action.

"At 5 a.m. on September 20th, 1917, our Division attacked Tower Hamlets Ridge, Passchendaele. I lay next to our commanding officer waiting for zero. Watch in hand, he counted the seconds - fifty, forty, and down to ten, five, four, three, two - and off we moved to meet a very stubborn resistance from the pillboxes which had not been touched by our barrage.

Their machine guns swept us with bullets, and some of our new men wavered; this was their first experience in the War. The colonel rallied them and ordered the section I was in charge of to rush a pillbox that was holding us up.

We rushed straight at it. The Huns threw a flare bomb in our midst and mowed us down with machine-gun bullets. Of my section of ten, five were killed and four wounded.

I felt as if a stone had hit my leg and spun round. Two bullets had gone through my thigh, but they were not dangerous. Other bullets passed through my clothes without touching me. As I lay I heard that the colonel was badly wounded, and another section had captured the pillbox while we drew the fire.

I made my way back, and, resting awhile, fell asleep, to be wakened by a German touching my shoulder. For the moment I thought I was captured, but found that he was the prisoner. He helped me back about three miles to the main road, and assisted me into a passing lorry. I turned to thank him, but he was gone."

Peter Cornwall was killed in action on 21st March, 1918. He was one of several men killed when the section of sunken road they were in was heavily shelled.

The memorium notice is from the Advertiser of March, 1919 and was entered by a lady grieving for Peter, I have no idea how she knew him, but she clearly loved him. 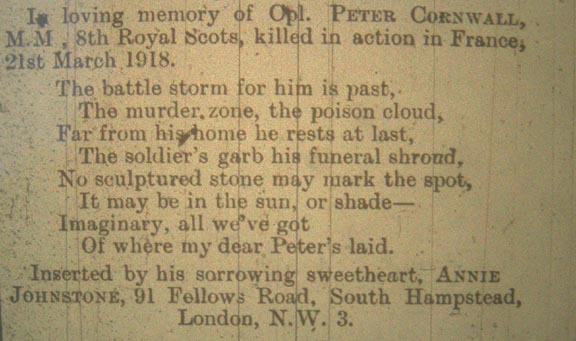 An this from some of his family