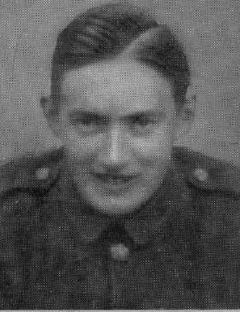 Lance Cpl David Tait Jack  was 20 years old the day he died, he was a medical student from Dalkeith with a weak heart, in reality he should have been nowhere near the war. Despite his heart he was a sportsman and a leading light in the local Scouts. He was accepted at the third time of asking  to serve as a medical orderly. He was killed on 29th June,1916 whilst out on a patrol to probe the German wire in the prelude to the Battle of the Somme.

Around midnight the patrol were caught in a flare and mowed down by machine gun fire, David's best mate Magnus Foster for Coaltown of Wemyss was hit and snared on the barbed wire, David went to his pal's aid and was shot and killed in the act. Foster was recovered from the wire but would also die form his wounds. David lies somewhere out in 'No Mans Land' his body was never recovered and he is commemorated on the Thiepval Memorial along with Magnus and large numbers of his comrades.

The summary above is based on the account from 'McCraes Battalion' by Jack Alexander, I am grateful to Pat Shackelton for bringing this story of heroism to my attention.

David's elder brother George Francis Jack also served during the war with the 2nd Royal Scots and 3rd KOSB, a keen rugby and cricket player he was a grain merchant before the war. He reached the rank of Lance Corporal befoe he was invalided out in 1918.

This appeared in the Dalkeith Advertiser at the time. 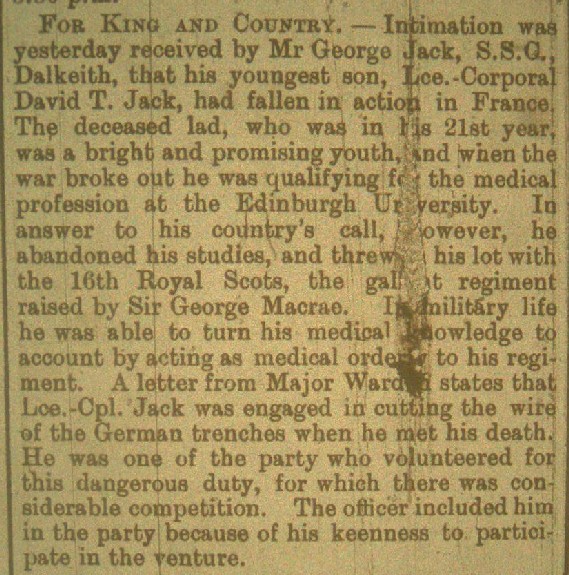 David's parents were regular church goers all their life and when they died a plaque was mounted on their pew to acknowledge that. A few years ago the famous artist John Duncan (no relation) was commissioned to produce four stain glass windows for Newbattle Church. They are lovely but not entirely obvious at first glance, however he decided that this would be the one that sits right by the seats occupied by Mr and Mrs Jack. I think it is a fantastic tribute. 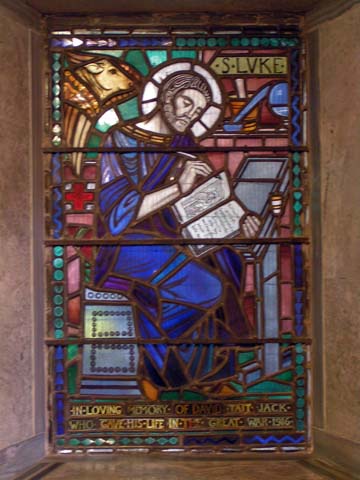