Originally hailing from Kippielaw, Newbattle near Easthouses James moved to Lamancha in the Borders near Peebles, he would die in Palestine whilst serving with 1st / 7th Royal Scots 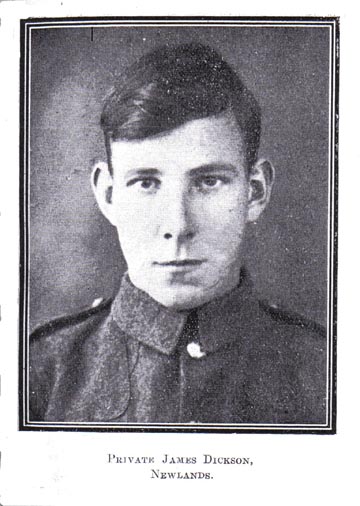 Born at Kippielaw, Newbattle on 27th July 1893, James was the youngest of the three sons of James Dickson, a ploughman, and his wife Margaret. In the Spring of 1914 James was one of 23 men who formed the West Linton section of the Peeblesshire Territorials. On 2nd November 1914 they left Haddington for France. Early in 1915, while acting as Trench Sentry, he was wounded in the forehead by a sniper. Again in April 1915, he was wounded in the right arm and chest at Festubert. In November of the same year he fell victim to fever and recovered. In 1916 he was stationed at Peebles, where he was in touch with his relatives. He was drafted in the 1/7th Royal Scots to Egypt. In April 1917, he was engaged in the first battle of Gaza and fell in the second battle of Gaza on 2nd November 1917. Death was instantaneous and he suffered no pain. James Dickson was an honest, upright, cheerful lad, greatly loved.