John was born a stones throw from Newbattle Church, he lived in the old coaching house as a child (still standing today) before moving to Musselburgh, both John and his brother would join the Highland Light Infantry, both would be killed in action.

Here is an excerpt from an article written by Jessie Baigrie , John's sister

I remember as a little girl of four, I stayed with my parents, my brothers and sister at Newbattle. The house we lived in was part of an old used in Stagecoach Days.

Between our room window and our next door neighbour's there was a big round window (a blind one) where the swallows built their nests every year. They made some mess but everyone said it was unlucky to destroy a swallow?s nest.

Opposite our house were the gates of the Marquis of Lothian's Estate where my Father worked. On each side of the gates were huge pillars where the peacocks perched. I was fascinated when they spread their tails out. It was a beautiful sight.

Sometimes, Father had to work late if guests were staying at the 'big house' -  Mother would send my brother Willie down with a 'piece' to him. Willie and I were always great pals and remained so throughout our lives, I went with him with the 'piece' but when I saw the geese that hissed and hissed I beat a hasty retreat.

I remember the first time I went to Church; I was dressed in a little red coat and bonnet trimmed with brown fur. I walked hand in hand with Father and Jane who was a cousin of my Mother. It was a lovely little Church with marble halfway up the walls.

At the age of 5,I started school and of course went with my brother and the two boys from next door Ally & Willie Drysdale, we always got a rosy apple each, there was a rather nasty boy who lived along the road who insisted I give him a bite of my apple but he had my brother and the other two boys to reckon with.

I remember my Mother being rather busy one day so she asked my brother Willie to take me a walk, the shows were in Dalkeith at the time, being a boy he was attracted to the wee boats, he must have let go of my hand and I wandered off up through the roads I used to go to school. I met a burly policeman who asked me my name, I told him Jessie but not my surname, he carried me to the station, I did not cry. I was quite pleased to be in the arms of the law (I'm pleased to say, my one and only time). His wife and her sister tried everything to get me to tell my second name but it was no use. The bobby left to see if he could find out who I belonged to and met Mother and Jane (who figured largely in my life) both crying and so I was restored to the bosom of my family.

John would not be the only man from the troop to fall in action here are his fellows Scouts. 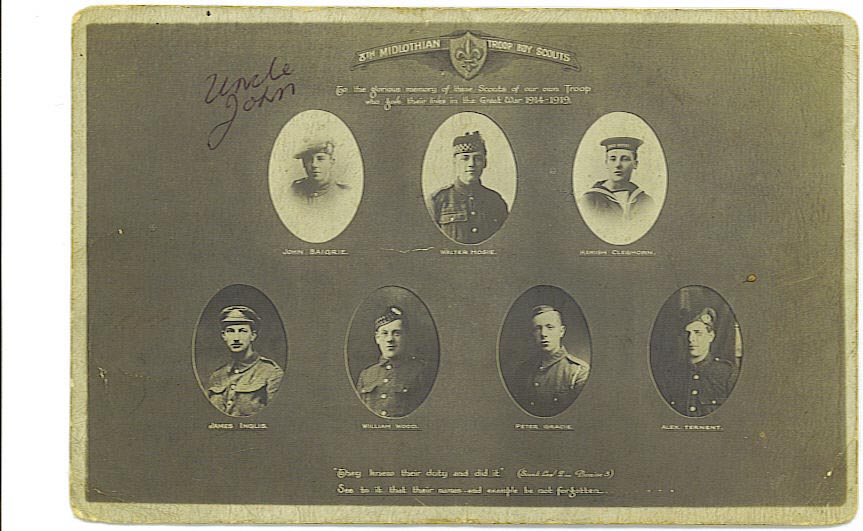 John was initially buried 'in the feld' along with several of his comrades, here is a picture of their grave, they were later moved to their permenant resting place at MARTINSART BRITISH CEMETERY (pictured also) 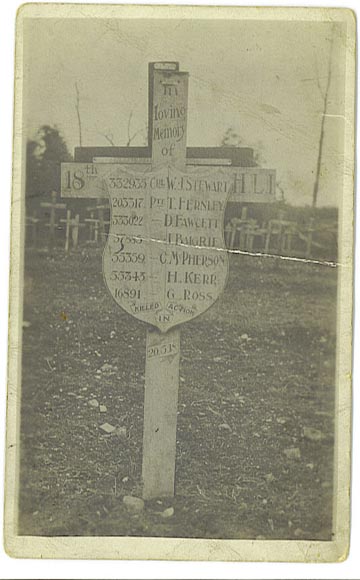 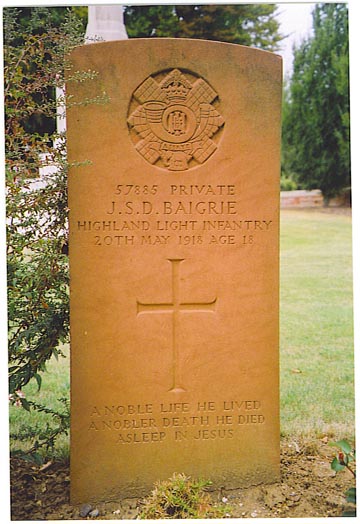 I am grateful to Evelyn Rose of the Great War Forum who kindly sent me the material on this page.