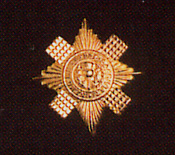 Born in Eskbank, Hugh Frood Kennedy enlisted age 20 with the Scots Guards on 9th July, 1914 just prior to the outbreak of war, he was previously a labourer with the Burgh.

Hugh went to France in early November, 1914 and was wounded on Christmas Day, 1914 in the arm , there appears to be some dubiety as to how he became wounded, however this would kept him out of action for the whole of 1915.

In early 1916 he re-joined his battalion, however he had contracted TB by this time due to depravation in the trenches, it is also recorded that he was suffering from Shell Shock, one of the earliest records of this as a result he was discharged from the Army in July, 1916 as permanently unfit, by which time the TB was at an advanced stage.