James was born at Newbattle and enlisted at Dalkeith.  He arrived in on 9th July 1915 with the 13th Royal Scots which formed part of the 45th Brigade in the 15th (Scottish) Division.  He was wounded at Hill 70 on the second day of the battle of Loos, 26th September 1915, the day that 18274 Private Robert Dunsire of the same battalion, won the Victoria Cross.

The wounds may have been caused by what is now termed 'friendly fire' an extract from the official history reads:

British artillery fire dropped short onto the trenches that the 45th Brigade was holding.  The morning was misty and the artillery had been told that the trenches would be temporarily evacuated.  But nobody had told the Scotsmen and the 13th Royal Scots in particular had suffered casualties.  With classic understatement, The Official Historian would write many years later, that the men upon whom the British shells fell  were therefore somewhat shaken and not perhaps able to take such a vigorous part in the assault as they might otherwise have done.

By the time the attack was finally pressed at 9am, the mist had lifted and although parties of the attacking battalions succeeded in breaking through into the German lines where desperate hand-to-hand fighting ensued, they were simply overwhelmed.  The attack failed not due to lack of determination on the Scotsmens part but because of heavy machine gun cross-fire from both sides and artillery fire which either killed them as they ran or forced their surviving colleagues to retire.  The few remaining men of the Fifteenth Division could not, on their own, re-take Hill 70.  More help would be needed.

Tower Bridge , Loos - the subject of heavy fighting and similar to the pits back home. 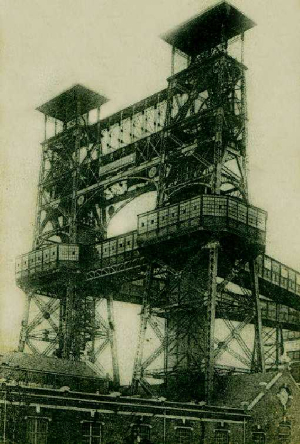 He was evacuated to Hospital in England and arrived at the beginning of October and after travelling first to the 2nd Eastern General Hospital at Brighton, would have transferred shortly afterwards to Hickwell.

Here is an entry in Nurse Oliver's book which he signed at the time.

He o recovered from his wound and was transferred to the 12th Royal Scots  in the 27th Brigade of the 9th (Scottish) Division.  It was while serving with this battalion that he was killed in action on 26th March 1918 in fighting near Pozieres during the German Operation Michael, he is commemorated on the memorial there.

I am indebted to Paul Nixon the author of the book Hospital Way and webmaster of the site Chailey 1914-1918 from which this page is based upon. You can visit his site by clicking here